I’m in Bangkok again, I have a free Sunday, the sun is brighter than ever, the sky clear and blue, the humidity tolerable for once, so I decide to go visiting three of the most famous attractions of this incredible city: the Wat Arun, the Wat Pho and the Royal Grand Palace, leaving time for a few diversion along the way . I’ve seen them already, more than once, alone and with friends and family, but one thing I learnt travelling is that, more often than not, the way your mind experiences and remembers a foreign land is affected by your mood, the light, the time of the day, the season you visit, and the same place in the end is always different. “Same same but different”, Thais say about fake goods mimicking the famous brands that you can buy at the market. And I think it applies to travellers and places too.

Wat Arun, the temple of Dawn

First stop, the Wat Arun, my favorite among all the temples of Bangkok. From afar it looks like an abandoned, greyish pyramid, instead its Khmer-style central tower is covered in fine coloured porcelain, surrounded by four similar but shorter towers. The temple drives its name from Arun, the Hindu God of Dawn, and it’s one of the symbols of the city.
I get there early and I’m almost alone, which is a plus since the steep steps of the central prang (tower) are tricky and I’m grateful to have some space. Did I mention how steep they are? Because they REALLY are, and yet the view over the Royal Palace and the Wat Pho, on the opposite bank of Chao Praya river, deserves the dizzy climb (and descent).
Guarding the entrance are Thotsakan, the green stone giant, and its buddy, the white giant Sahat Decha, both on a prime location to admire fantastic sunrises and sunsets. A large party of Indonesian tourists, who enters the Wat Arun soon after me, all dressed in Thai traditional costumes, stops for some chit chats and a shoot together before I go on to my next destination.

Wat Arun is close to the neighbourhood of Kudi Chin where, on a short walk, I visit the Catholic Church of Santa Cruz, the Chinese Taoist temple of Kuang An Keng, the small museum of Baan Kudi Chin and a delicious bakery which specialises in Portuguese desserts made of eggs and sugar. Santa Cruz was built by the Portuguese in this part of Thonburi, on the Western bank of Chao Praya, in 1720 and restored at the beginning of Twentieth Century by Italian architects. The ground that houses the Church had been granted to the Portuguese by King Taksin as a reward for their military support in the wars against the Burmese invaders who had seized the old capital, Ayutthaya.
I’m not particularly interested in churches, especially when in Asia I look for the exotic, but this building is set in a fascinating district of old wood houses, mosques and temples and it talks of a romantic past, when Bangkok was the Venice of the East, a city of 1-floor floating houses, endless fields and narrow alleys that always ended in a klong (a canal). 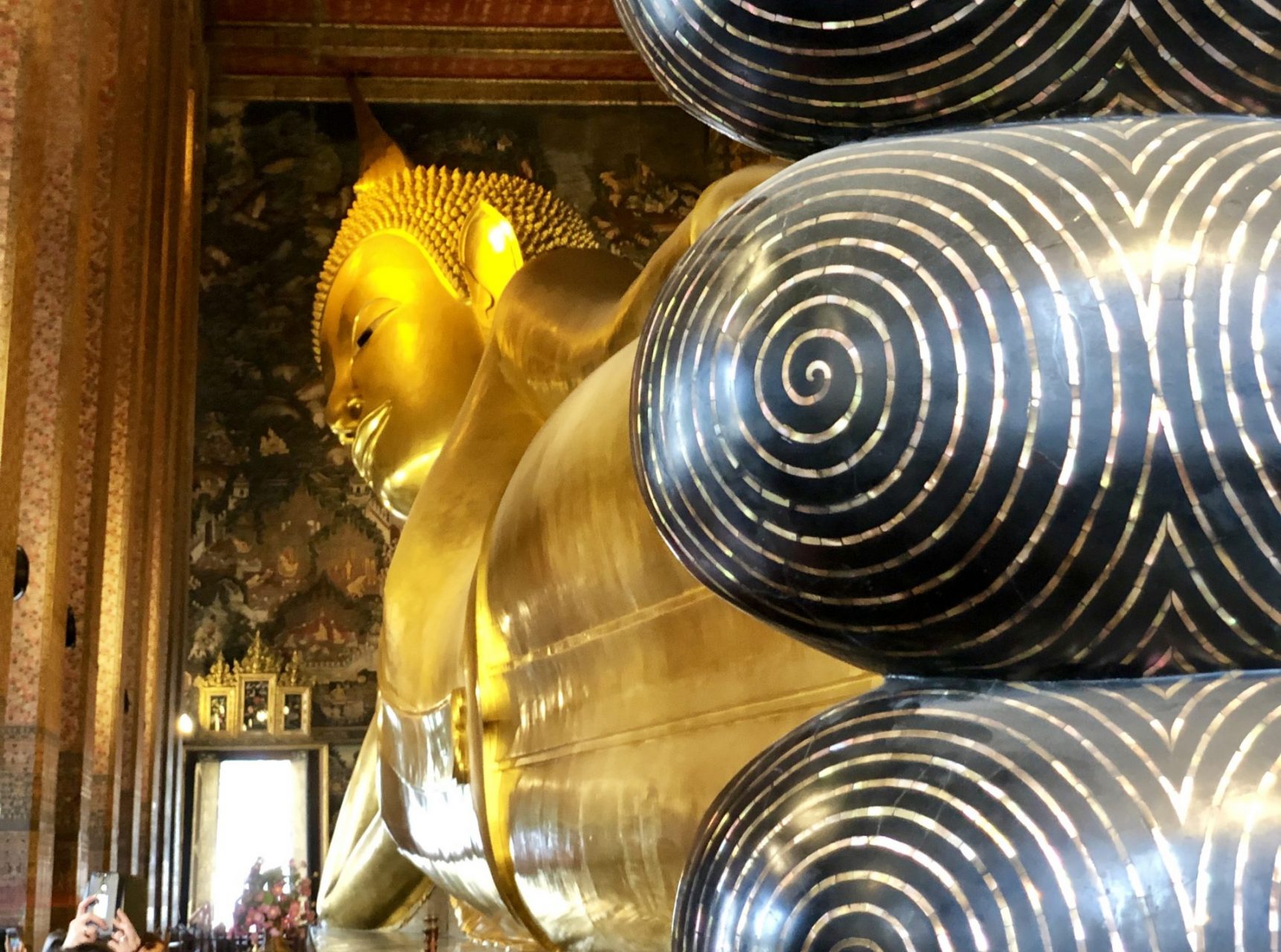 While the sun is rising on the horizon, I leave Kudi Chin and cross the Chao Praya River to go visit one of the most ancient temples in the city, Wat Pho, which existed even before Bangkok became the Capital of King Rama’s Kingdom. It houses the largest collection of Buddha images in all Thailand, including the Sleeping Buddha, a 46-metre long, 15-metre high splendid statue that attracts huge crowds of visitors. As you probably guessed, Bangkok is a city of temples, but if you choose to see only a few of them, the two I’m writing about in this article are a must. The Wat Pho was the first public university in Thailand and it’s still a school of Thai Traditional Medicine, and the place where Thai massage was born.
If you love massages, this is the place to be: you can receive a treatment (thirty, sixty or ninety minutes) from students who are learning and practicing the traditional Thai massage. The rates are a little higher that what you’d pay in any average massage centre around the city, but here you are guaranteed the hands of professionals. Don’t expect essential oils and a soft touch, though: a strong pressure is applied to the body and the massage is more often painful than pleasant, but the result’s exceptional in the end. I’d love to take a massage today, but my schedule is quite tight, so I go on. 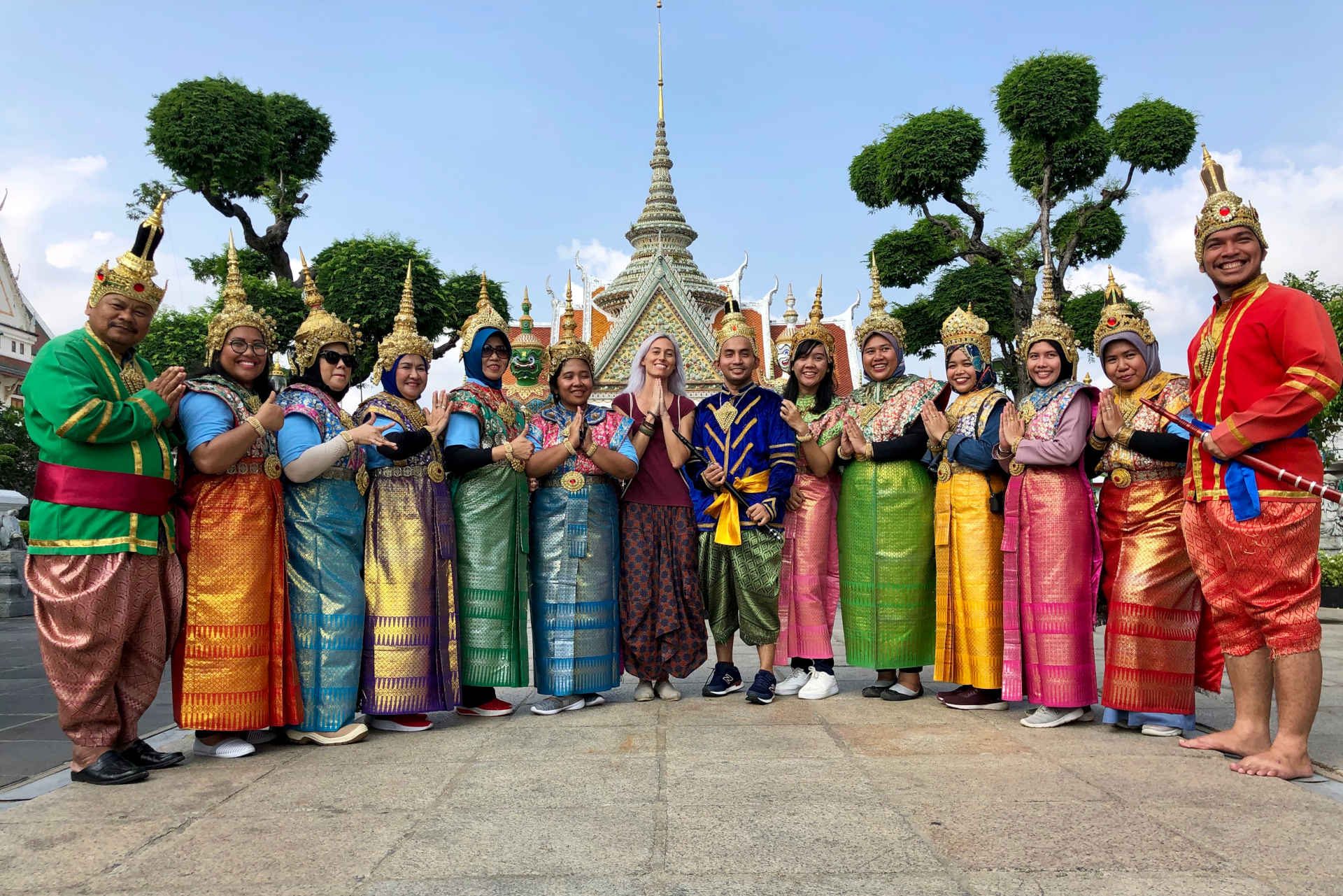 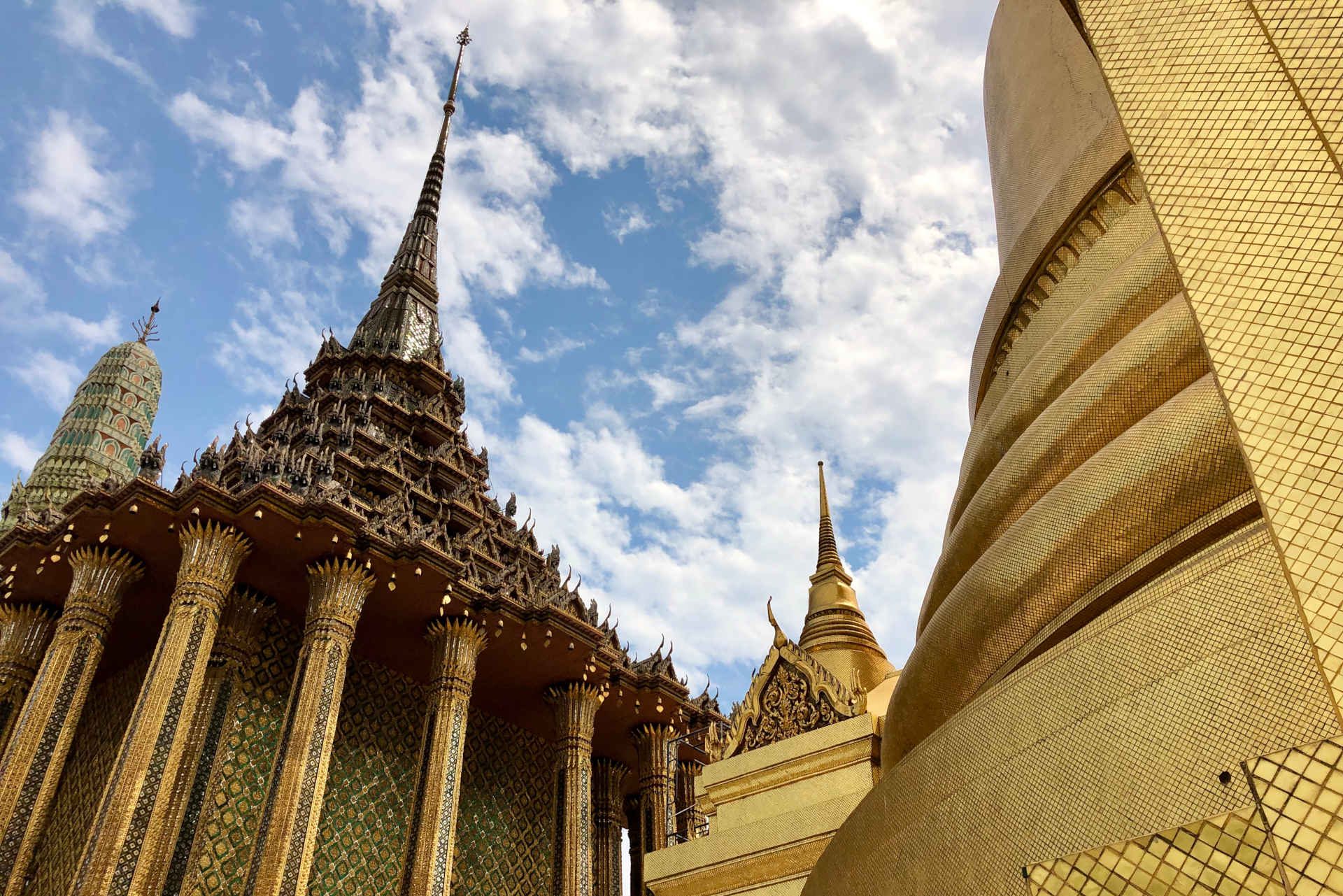 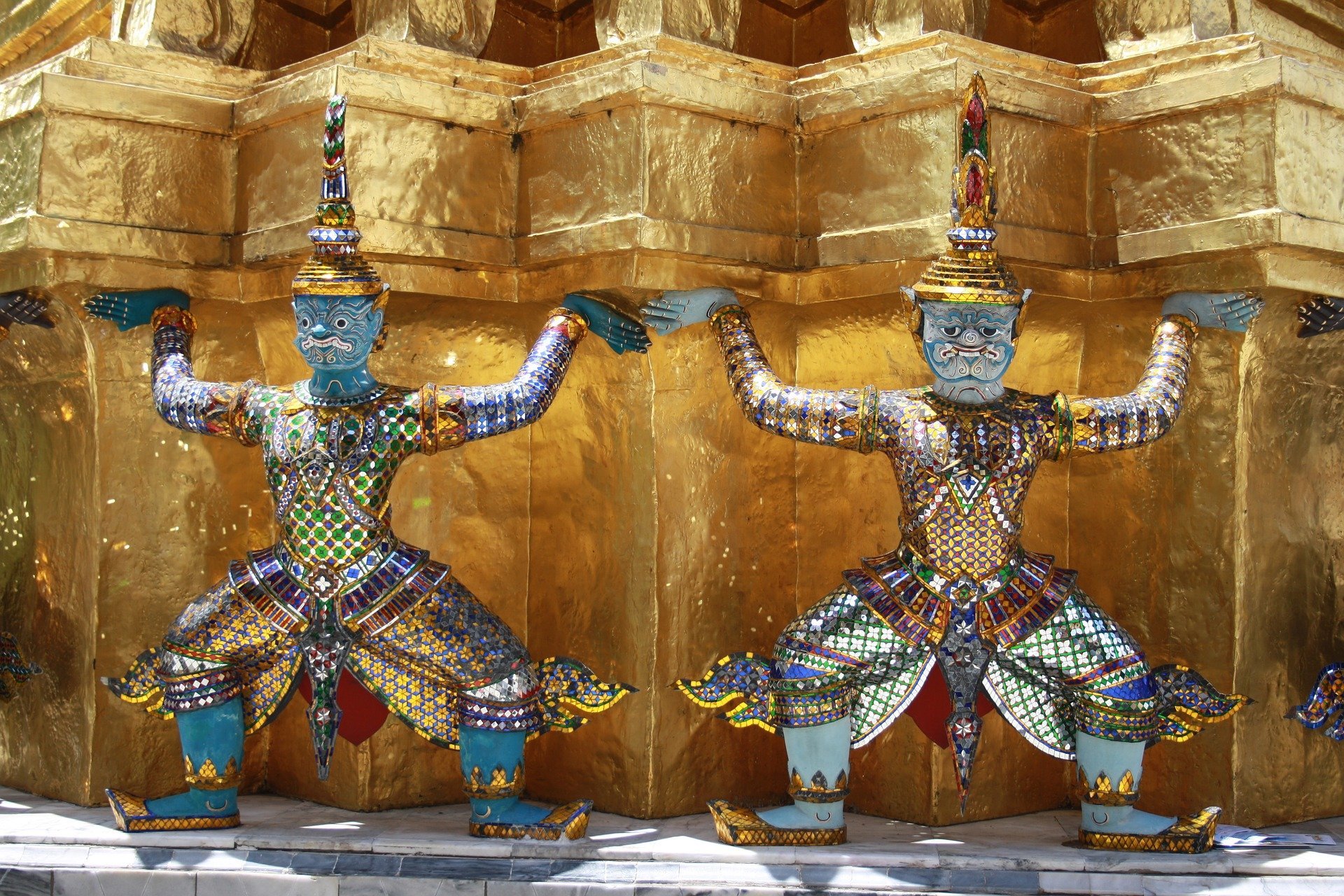 As the sun rises, the heath becomes challenging for me too, a lowho is at her happiest when the thermometer reaches 35° C, but I keep going until I reach the Royal Grand Palace, the glittering complex of buildings, gardens, halls and pagodas that used to be the Royal Residence of the Kings of Siam since 1782. It’s not their official residence anymore after 1946, when Rama VIII (eldest brother of the beloved King Rama IX who died a few years ago) was found dead in his quarters inside the Grand Palace; nevertheless the complex is still used for official celebrations and State dinners, and it’s beautifully maintained.
Within the Royal compound, one of the most popular – and crowded- attractions is the Temple of the Emerald Buddha. My advice is to avoid it at weekends for a chance to soak up the mystical atmosphere without the noises and annoyances of the crowd.
Today, I stay only a few minutes inside this temple, and spend the rest of my visit wondering around aimlessly among the golden domes, the sharp spires, the mosaics, the Naga snakes and the semi-divine Apsara princesses that embellish this spectacular complex in the hearth of the old city. 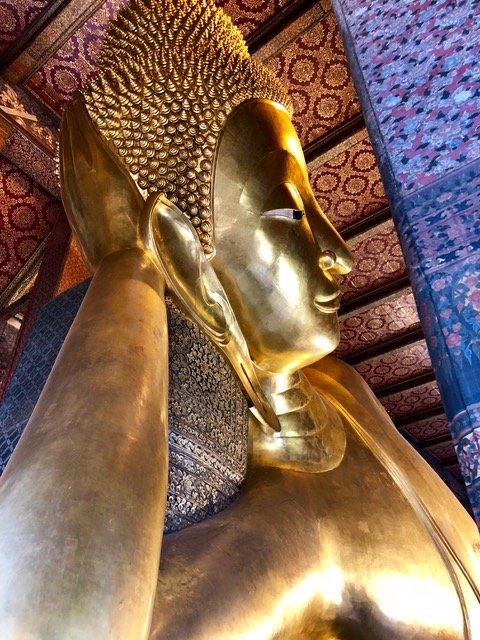