Places to visit in Sangkhla Buri

The Mon region of Kanchanaburi Province

It was the first week of October, last year, the green season in Thailand was as wet and humid as expected, but more quiet than usual due to the Covid restrictions, and the team of Fantasia Asia was feeling restless and bitten by the travel bug. So we decided to leave the sticky and stormy Krabi weather to go traveling North. In about a week we drove to Hua Hin, then Bangkok, then further on to Kanchanaburi Province, stopping along the way to visit a few resorts and landmarks and enjoying a cruise on the River Kwai. But the highlight of the whole trip for all of us, and especially for me, was visiting Sangkhla Buri, a region where I had never been before.

Sangkhla Buri is a district in the far West of Kanchanaburi province, Western Thailand, on the Myanmar border. It is an idyllic place and well worth exploring as it is off the foreign tourist trail (yet popular among Thai tourists, so expect to meet other travellers if you’re visiting at weekend or during public holidays).

The small town is tucked away in between forests and hills, overlooking the Songaria River.

What to see and how to go around:

Once you reach Sangkhla Buri, most of the popular attractions, including the Mon bridge, the market and the main temples, are within walking distances from the village. However the Wat Wang Wiwekaram and Chedi Buddhakaya are located up hill, and require a certain level of fit or a motorbike. Motorbikes can be rented in Sangkhla Buri (most guest houses can do it for you) for 150-200 THB per day, and are essential if you wish to visit the Three Pagodas Pass or other attractions that are further away from the village.

We didn’t visit the Three Pagodas Pass (which is the border crossing station to Myanmar) because at the time the area was restricted for Covid. A large part of the district is covered by the Khao Laem Reservoir, an artificial lake made by the Vajiralongkorn Dam on the Khwae Noi River.

We spent two nights and three days in Sangkhla Buri, as part of our 10-day tour that included Bangkok, Kanchanaburi and the River Kwai. 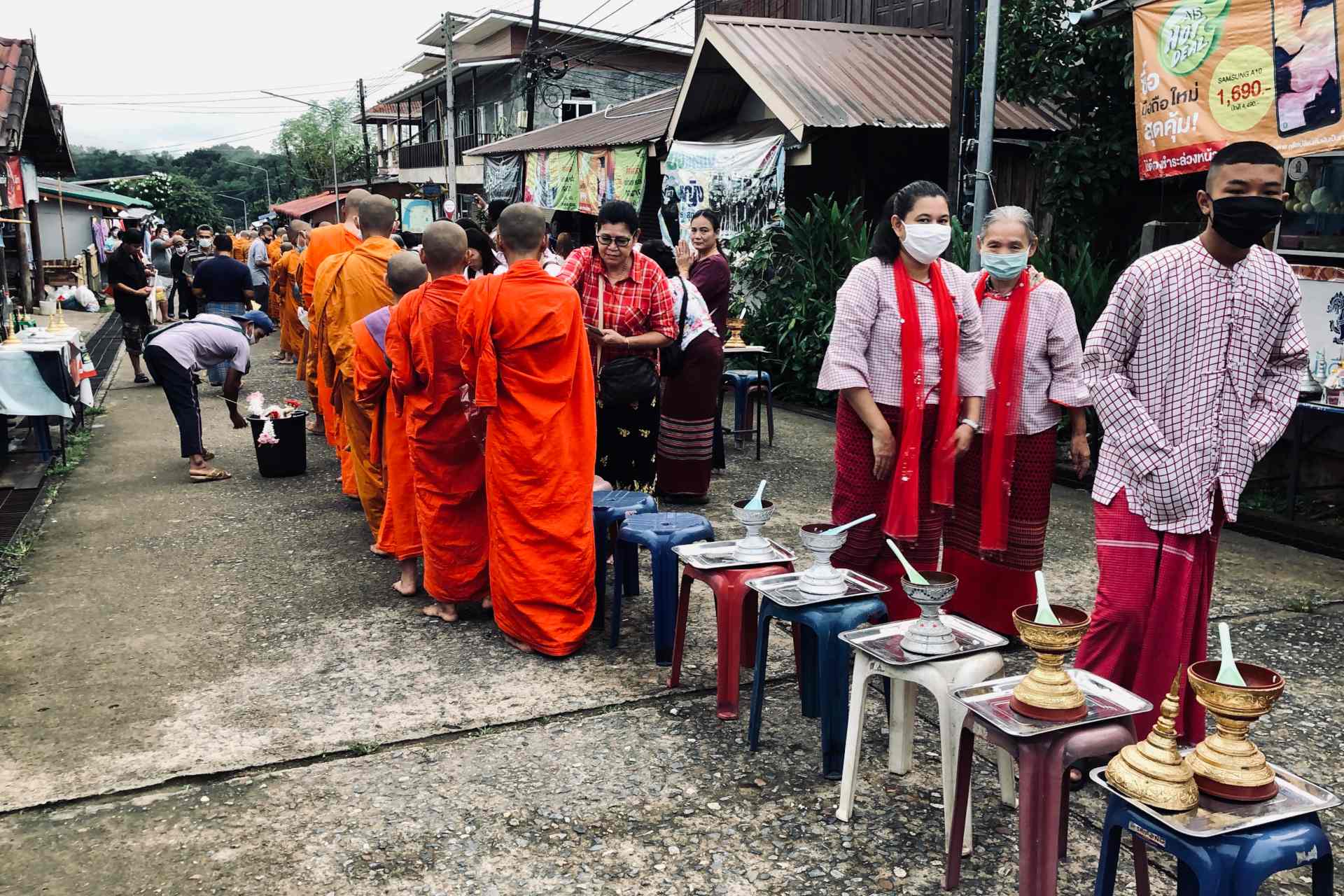 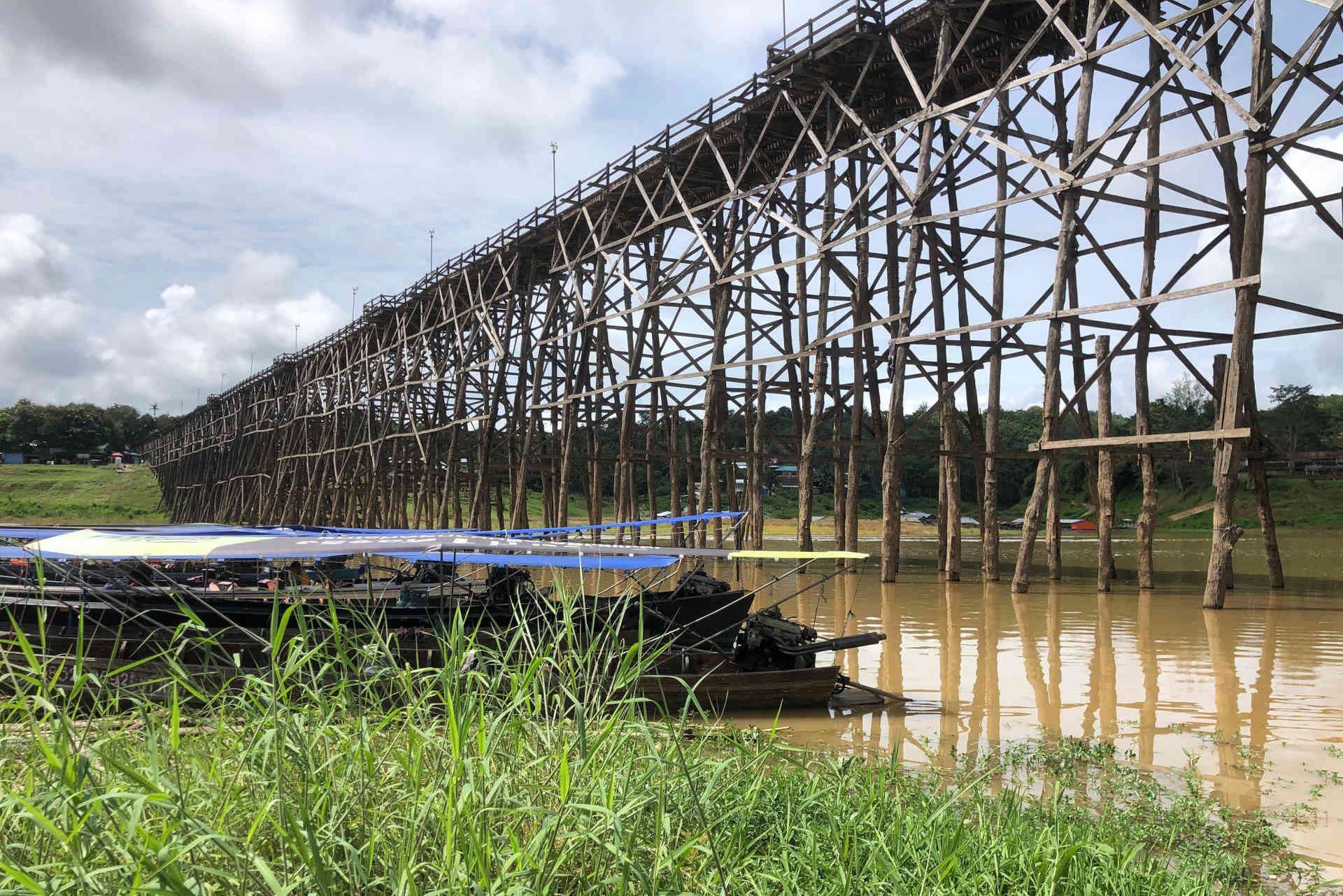 On the first day we reached Sangkhla Buri late at evening, under a torrential storm, after driving in the dark on a rising, winding road from Kanchanaburi. When we finally reached our guest house, we had a quick bite to eat and went to sleep without inspecting the village, tired as we were.

The following morning, however, we woke up at dawn and walked the 200-meter distance between our guesthouse and the Mon bridge to take part in the alms giving ceremony at the Mon village across the bay: everyday, visitors and locals line up to wait for the monks who walk from the main temple of Sangkhla Buri collecting food donation throughout the village.

It was crowded with locals and tourists, and it lasted about half a hour: the monks fitted in their orange robes walked in a line, the younger first, followed by the elder. There were at least 10 or 15 child monks and a pack of street dogs who politely followed, or preceded, the procession, waiting for their share of goods. People would do the “Wai” (the Thai greeting with joined hands) to greet the first monk of the line, then place what they had bought -or cooked- in the monk’s bowl, continuing with other monks until all the goods had been given away.

It was chilly in the early hours of the day, and soon after the alms giving we stopped for a hot coffee and tea and a good breakfast in one of the restaurants of the Mon village. We chose the most crowded, and it was the right choice: I had the most delicious Joke I’ve ever tasted in Thailand, and the whole party agreed with me. Seriously, if you like Joke, the traditional Thai porridge with eggs and pork, don’t miss the one at Joke Nang Yong restaurant. The crispy dough sticks that come as a side dish are delicious too. We went back there the following morning as well, and I still miss their “congee” now that I’m back in Krabi.

After filling our tummies we walked through the Mon village, taking a look at the shops (mostly food stalls selling Thai and Burmese snacks, but also clothes and body products) then we went back to our guest house for a quick shower and rest. On the way back we stopped for photos at the beautiful Mon wooden Bridge, the longest wooden bridge in Thailand, connecting two communities, the Thai and the Mon, above the river Songaria.

Mon children in traditional costumes and school uniforms were selling knick knacks, traditional snacks and white face powder (made from the tanaka tree) or volunteering as guides for visitors.  We decided to hire three of them who were working as a team, and they accompanied us for a while, telling us about the bridge, their community and their daily life. I was relieved to learn that they go to school after the alms-giving ceremony, meaning that they only hang out around the bridge in the early morning to help supporting their family, then they go back to being students.

I’ve also been told that they sometimes jump in the water from up on the bridge, which is kind of scary given that the water level changes so often!

We continued by visiting the three temples that are all that is left of the old Sangkhlaburi village which was flooded when the Vajiralongkorn Dam was built, the Sunken temple being the most famous.

In order to see the buildings we rented a boat through our guest house, and departed around 10 in the morning. The first stop (old Wat Wang Wiwekaram Temple) was disappointing, at least for me: the temple we saw was standing on a hill, partly covered by bamboo poles since it was under renovation, and the area all around it was occupied by construction materials and littered with garbage. We walked around the temple, then went inside for a quick look (despite the bamboo poles used for construction, the building was open). Not much to see. Next.

Cruising aboard the thin and long motor-launch was very pleasant, especially since we were blessed by a sunny day (quite unusual for Sanghkla Buri at the beginning of October) and a tranquil atmosphere. After about 15 minutes we arrived at the second stop, Wat Somdet temple, a Thai temple perched on a hill. We walked for less than 10 minutes on a path uphill, fighting mosquito hordes, until we reached the building. I liked this second temple very much, because it’s partly strangled by tropical trees and its atmosphere resembles that of Angkor Wat complex. The third stop of the tour is the real sunken temple (Srisuwan Karen’s Temple), a rectangular building that when we visited it was submerged for three quarters.

Depending on the season and the amount of rain, it can be fully submerged or almost all dry.

The following day we went back to the Mon side of the village for the delicious porridge breakfast, then we rented two scooters and drove around to see the new Wat Wang Wiwekaram, also called Luang Pho Uttama Pavilion, and the Chedi Buddhakhaya .

The Wat Wang Wiwekaram is a mix of Thai, Burmese and Mon architecture. It consists of several buildings, but I was particularly impressed by the one with the multi-layered turquoise facade. It was built by the late monk Phara Uttama, who was one of the most revered of Thailand, to replace the old sunken temple that had to be abandoned after the Dam flooded the old village. Its main hall is a pagoda lined with small Buddha statues.

The golden roof of the Chedi Buddhakhaya is not less impressive that the one of Wat Wang Wiwekaram, albeit different in style: the jutting yellow roof towers the Mon Village and can be spotted from the lake during the boat tour.

We had more exploration planned for the day, but the weather turned out for the worst in the early afternoon and by the time we reached our accommodation we were soaked wet and in need of a rest and a dry place.

Before being forced to retreat to the hotel to dry ourselves, we crossed the Songkhalia Bridge, which runs parallel to the Mon bridge, offering a vantage point to take stunning photos of the old Mon bridge. Just before sunset, in the golden hour light, with the storm settling into a drizzle, the scenery was incredibly peaceful and magnificent, the perfect memory to bring back home.

The trip from Bangkok takes around 5-6 hours by bus and can be up to 7-8 at weekends. There are a few direct buses from Bangkok’s Mochit Bus Terminal to Sangkhlaburi and more options of buses traveling to Kanchanaburi City where there are connections to Sangkhla Buri.

There are several accommodation in Sangkhla Buri: you can sleep at a raft hotel (a floating hotel) or at one of the guesthouses on the Thai side of the village. We slept at Chanakarn Guesthouse Sangkhla Buri which was an excellent choice for our needs: clean and simple bungalows, basic but well located, just a few hundred meters from the Mon Bridge.